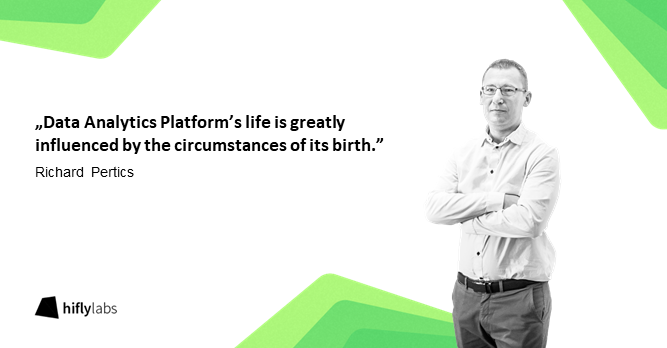 With the increasing amount of data at companies and their environment and the development of business needs associated with them, corporate BI systems have become unavoidable on the one hand, and more and more popular on the other. Nevertheless, they cannot be considered a universal, eternally useful secret weapon providing data assets.

We can describe bi systems as data-driven organizational processes that create business value. These systems have been part of business life for a long time so it really depends on our approach how we call this process. However, data-based value creation is an increasingly complex process, and as such, it cannot be solved forever with a single universal practice, as the amount of data in the world is growing exponentially and exploitative technologies are evolving rapidly. When designing and operating BI system, it is worth stopping from time to time and considering whether the flow of information in the organization is efficient.

The birth of Data Analytics Platforms

A BI system can be developed in parallel with the development of the company, through organic development, as a by-product of a development, or as a result of a planned operation. Its life is greatly influenced by the circumstances of its birth, as the life cycle it goes through depends heavily on it. Of course, it is not possible to generalize, neither conception is better or worse, as it all depends on the industry, the size of the organization, the preparedness of the workforce and the technologies. Besides, the effectiveness of a system can only be evaluated after some time.

A typical example of a system evolving through organic development is when data assets begin to accumulate at one or more points in the organization and business users begin to build on it, asking increasingly sophisticated questions to the team / teams disposing of the data assets. As the amount of data grows with the company’s life cycle and activities, the request for information also becomes more diverse and dense. To facilitate their work, the owners of the data assets make various procedures and reports, eliminating repetitive and unstructured work. They do this with tools that are right at hand or that they understand. A kind of data asset exploitation practice is developing around the data service team formed in this way, which also attracts newer and newer corporate data groups and business needs.

The advantage of a BI systems created in this way is that it does not use extra resources, which are usually distributed over time anyway, and there are no shock-like changes and surprises in the organization. Their disadvantage is that their operation can be more and more expensive and operators are not necessarily interested in replacing them, making it increasingly difficult to channel in peer systems based on new technology. An additional risk of an organically formed BI system is that often only the system developers understand it, and the structure of the system is not always well considered. All in all, these make it difficult to delegate system-related tasks, which can generate organizational tensions.

The Data Analytics Platform can also be created as a by-product of other development and procurement in the organization.

In the case of larger developments, the IT solution package delivered to the organization may contain some BI technology, but the primary goal is not to optimize BI service. Such a decision may be justified by cost-effectiveness or because the organization wants to solve its infrastructure and organizational development problems at the same time. The result can be effective if the organization considers BI aspects in its central procurement and implementation. In practice, however, this often fails, for example, because there is such a high time pressure on the entire development that there is no time to rethink BI processes. In such cases, it is even possible to introduce a BI system that is used by no one or by just a few people, and the old BI processes still work the same way – in parallel.

A Data Analytics Platform can be built up as a result of planned development.

Nowadays, more and more organization are realizing that their data could be monetized, i.e. used for financial gain. This thinking often leads to the development of BI strategies and the launch of projects. Systems born in this way, when designed well, are generally more durable and can create truly significant business value. Their disadvantage is that such a development can have high startup costs, and new technologies and organizational units can also cause tensions within the company. At the same time, well-designed systems can be cost-effective: they are cheaper for a given set of functions and over the entire life cycle or have a higher value-creating ability at the same cost level than their organic or by-product counterparts. Subsequent operations may involve the emergence of new types of roles in the organization for larger companies and diverse data sets, such as Data Owners, BI Developers, Data Analysts, or Data Scientists.

In the next part of our mini-series on the life cycle of BI systems, we will discuss the life and efficiency of developed solutions.