Prescription medicine sales continue to fall, May data can’t even match the 2018 average 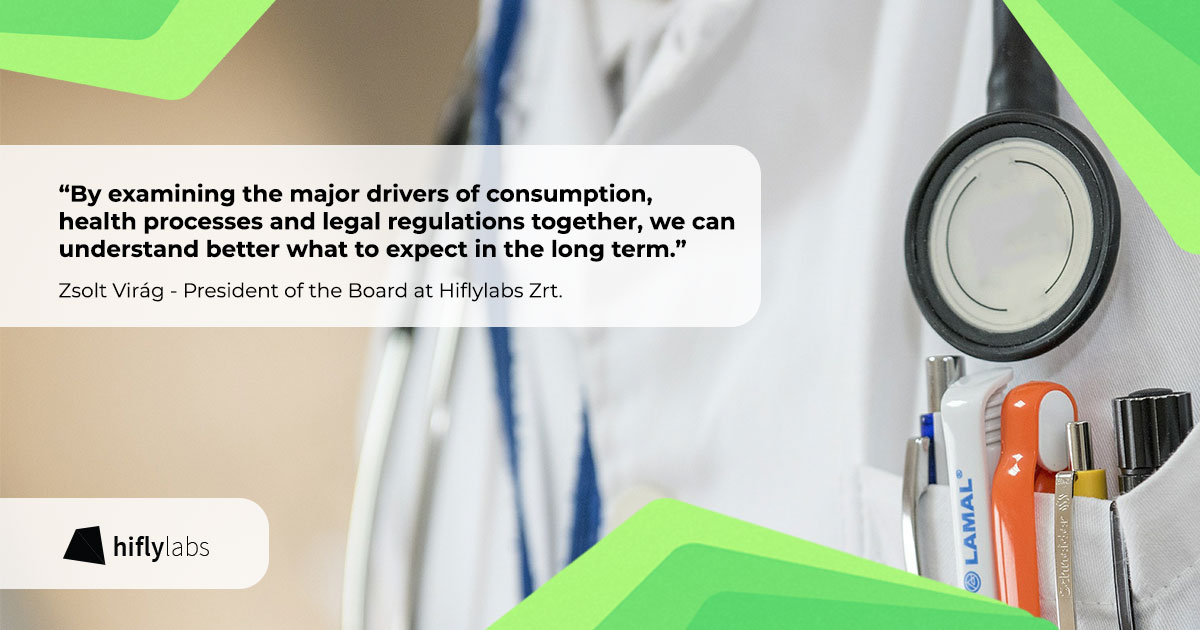 After the decline in April, the turnover of domestically subsidized prescription drugs continued to fall, purchases in May were already below the 2018 average.

In May 2020, the gross turnover of subsidized prescription drugs was only HUF 40.6 billion, which is the lowest value in the last 1.5 years. There has been a sharp decline in subsidized medicine sales since the outbreak in March. Domestic pharmaceutical sales have been growing steadily in recent years, but the data from May are more similar to the 2018 values ​​than to the sales of the past 1.5 years. Turnover in May declined further by 4.9 percent compared to the also weak April, and decreased by 11.5 percent compared to the same period last year. Overall, however, we cannot speak about a long-term decline in turnover, as the aggregate turnover for the first 5 months of the year is still nearly 7 percent higher than in the first 5 months of 2019. 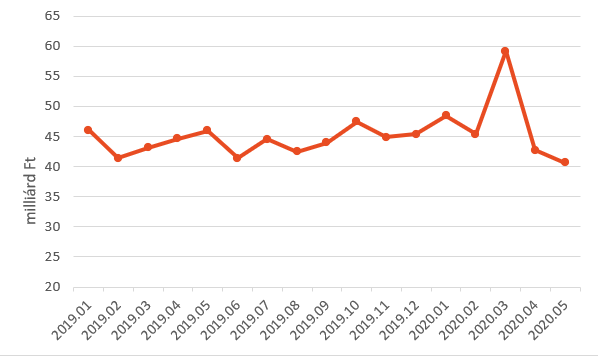 The decline in the number of products sold is even more significant than the decline in turnover. In May, a total of 13 million boxes of medicine were sold, which is a 14.4 percent decline compared to the same period last year. According to the data of the CSO (i.e. Central Statistical Office of Hungary), there was a slight increase in prices, but according to data, the turnover per box increased much more than this. It follows that sales in pharmacies are shifting towards more expensive products. However, the number of products purchased is dropping so much that the total turnover still decreases.

The purchase of more expensive products is an interesting issue in terms of the fact that the pricing of medicines is determined by law, and thanks to the so-called degressive margin regulation, the margin of pharmacies is lower on more expensive products. Overall, the low turnover in May is accompanied by an even lower cumulative margin for subsidized prescription drugs.

Examining the year of 2020, it can be said that the effect of early purchases in March is still visible in sales data. However, this effect should no longer appear in data for June, as people can buy prescription medicine typically for up to three months in advance. Accordingly, traffic data for June may be a good indicator of domestic medicine consumption patterns for a longer term.

Change in pharmaceutical sales in May compared to April
(percent, month/month change) 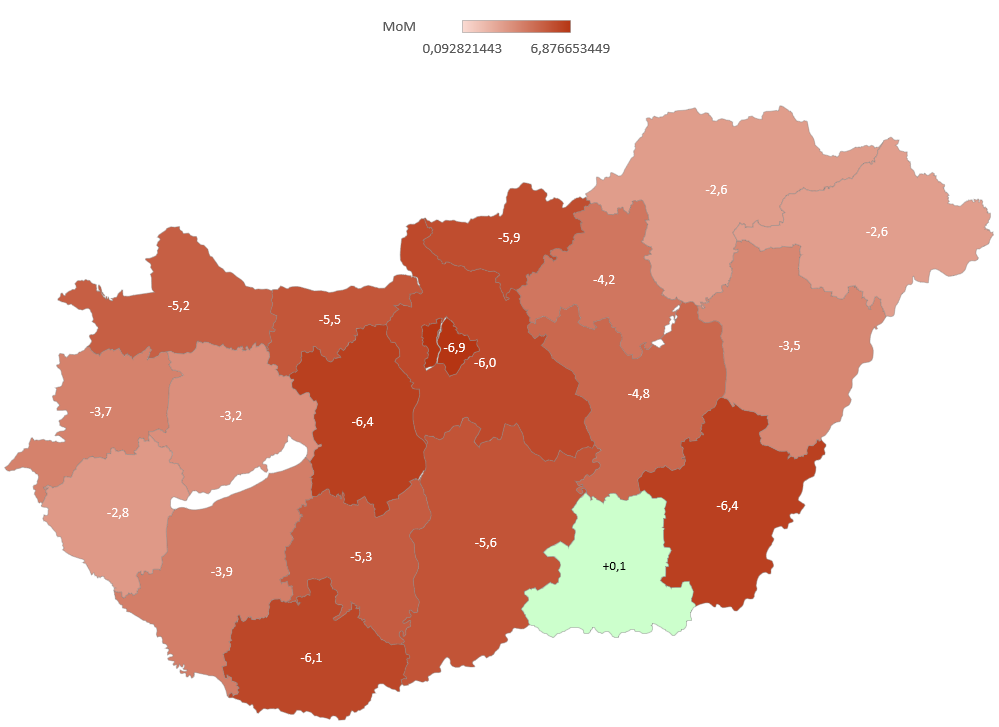 Comparing the county turnover in May to the same period of the previous year, we can see that Pest county performs the best due to the agglomeration effect, the decrease in this area is only 4.4 percent. At the other end of the list is Budapest, where there was an 18.9 percent decline compared to May 2019.

Change in pharmaceutical sales in May compared to May 2019
(percent, year/year change) 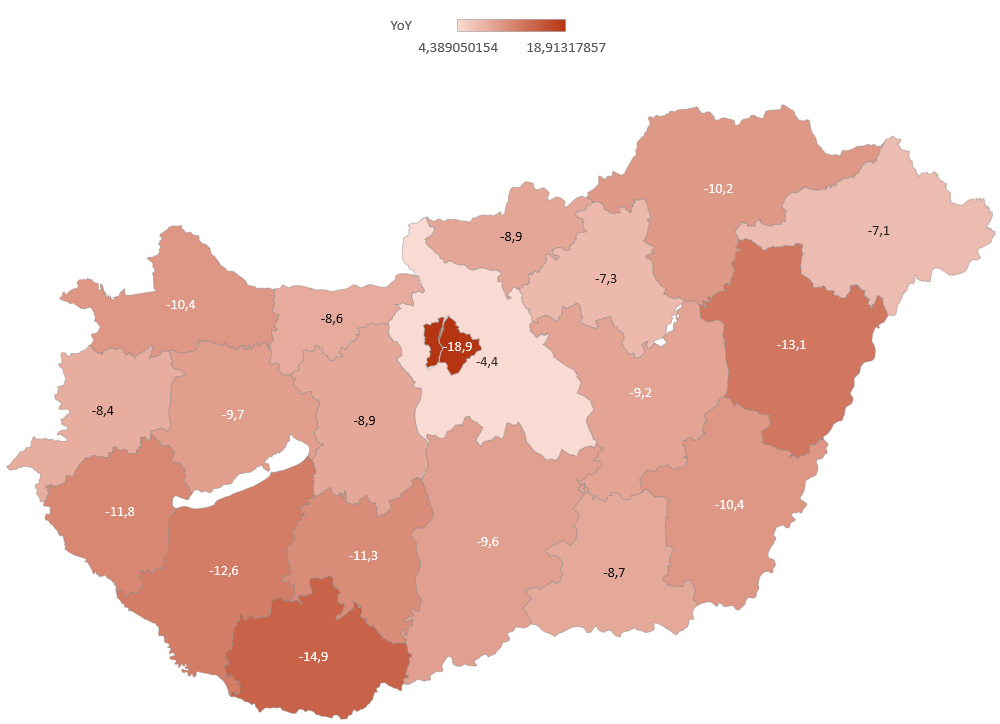 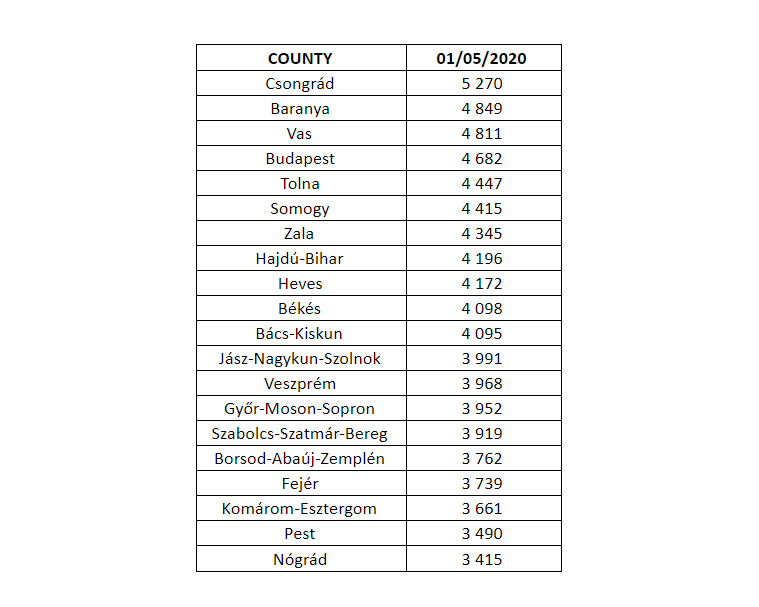 The breakdown by product type reflects on total turnover well, with products considered of a higher weight typically dropping in conjunction with the decline in average consumption, so no major rearrangement between groups is seen in May. Sales of some drug types with lesser weights have increased, such as the urogenital category. The turnover of these products has decreased in recent months compared to other products. Presumably, social distance has also reduced the occurrence of urogenital diseases, or less acute patients may have postponed their purchases, and a kind of correction appears in the May data. 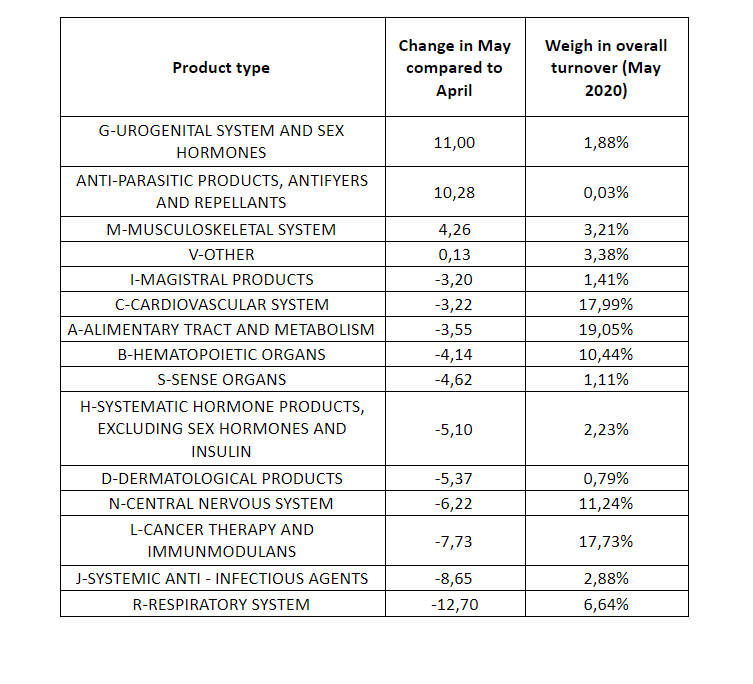 Medicine consumption habits describe well the society and health policy of Hungary. However, no hastily conclusions should be drawn from purchases. Decreasing medicine use alone does not indicate a healthier society, nor does it mean that the population is less concerned about health. “However, by examining the major drivers of consumption, health processes, legal regulations, and seasonality together, we can better understand where we are going and what to expect in the long term.” – says Zsolt Virág, President of the Board at Hiflylabs Zrt., the company that performed the data analysis.