After reaching the bottom in March, the number of home seekers has risen in Hungary, and the change in demand seems to be leaving a serious mark on the real estate market in the long term.

The analysis of the search database of the market-leading real estate portal, ingatlan.com, shows an interesting picture of the reactions of the Hungarian real estate market to the pandemic. “It was presumable that the uncertainty generated by COVID would leave its mark on real estate demand, but home seekers’ reactions brought big surprises” – says Zsolt Virág, President of the Board of Hiflylabs Zrt., the company that completed the data analysis. Not only have the real estate market exciting months behind it but perhaps the period ahead of us might even be more interesting.

The appearance of the virus in Hungary left a drastic mark immediately on the real estate market. News of the first COVID patient in March had not yet reached all parts of the country, but the number of searches for properties fell 30 percentage points in the days following the announcement. The real estate market froze in early March, but this did not last long. Just after 2 weeks of ups and downs, the number of real estate seekers has started to increase, and now the number of searches is 20 percentage points higher than at the beginning of the year. A retrospective analysis of the data also showed that this phenomenon was solely due to the COVID, and the effect of seasonality can be ruled out based on data from previous years. 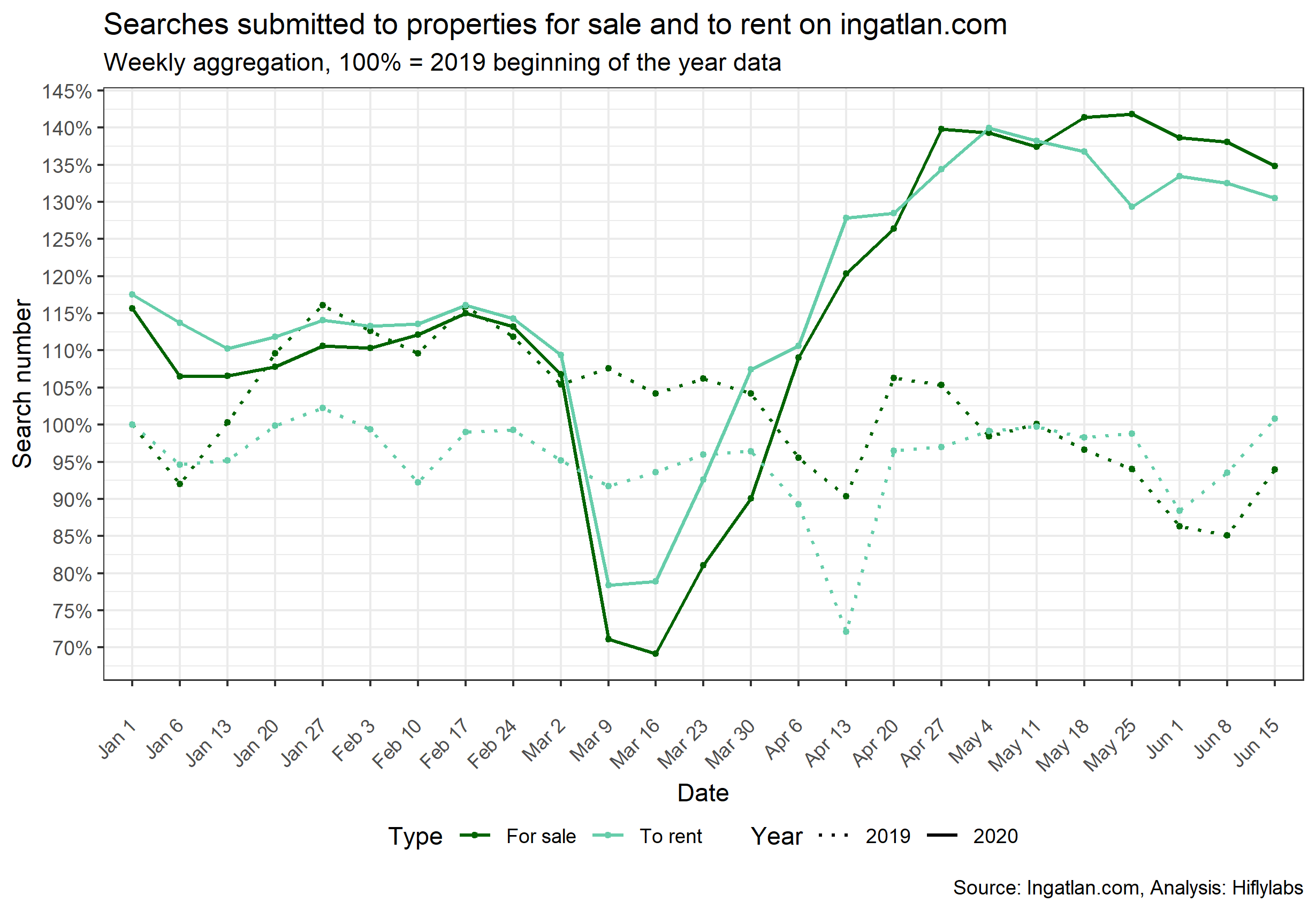 Interestingly, the demand for houses for sale and rent shows a similar trend, but if we take a closer look, there are important differences. Those interested in renting a property appeared 1 week earlier after the virus emerged in Hungary, but perhaps more interestingly, demand for property for sale fell to 10 percentage points lower as in March and stabilized at a level 5 percentage points higher in June than that for rent. Due to social distancing and restrictions, it seems that those tenants were interested first, for whom moving was easier, and the measures left a deeper mark on buyers.

From apartments to houses

From Budapest to the countryside

The rearrangement of the demand also appears at the regional level. In terms of the real estate market, Budapest emerges from all other areas of Hungary, and the epidemic affected this city more than average, still, the demand in Budapest was to the same extent affected as in the country as a whole. At the same time, after the interruption in March, there is already a significant difference in the demand for Budapest and the rest of the country. Searches in Budapest returned more slowly to the level at the beginning of the year, and they did not reach a level as high as areas outside the capital. It is true that searches in Budapest also reached a higher level than at the beginning of the year, but the difference is only 10 percentage points, while in areas outside Budapest the increase in demand is more than 30 points.

Of course, social distancing restrictions have also increased the demand for real estate around Lake Balaton. After the appearance of the virus, the demand on Lake Balaton also decreased, but from the middle of March, the total weight of searches on Lake Balaton started to increase rapidly. In the spring and early summer period, the growth of demand at Lake Balaton is generally typical, in 2020 this changed to the extent that the demand started to grow earlier than in previous years. The number of searches for properties by the Lake Balaton is also higher than it was at the beginning of the year. And even much higher in terms of growth than in areas outside the capital.

Both cheap and expensive

Another aspect of the reposition is the change in the price of the properties. In recent years, individuals looking for real estate have tracked changes in real estate market prices well and have been searching for properties at higher prices year after year. This trend broke in 2020. Although the average price of the real estate has not decreased, it has not increased further, but it is even more interesting that people interested have widened the price range of acceptable properties. The lower end of the specified price intervals has been lowered and the upper end has been raised. Overall, people look for properties now much more widely than in previous years – both for rent and sale.

As a significant part of the wealth of the Hungarian population is real estate, it can have a serious impact on the whole society if the changes in the real estate market processes prove to be permanent. Monitoring and forecasting real estate market developments is an important but rather difficult task. “The real estate market experienced an uncertain period in the second quarter of 2020, but due to our cooperation with ingatlan.com, and capitalizing on the data of its market-leading portal, we managed to draw some important conclusions by data analysis” – says Zsolt Virág, president of Hiflylabs, the data analysis expert company.

The analysis is based on the number and type of searches submitted on ingatlan.com. Ingatlan.com is a key player in the real estate market of Hungary, so the data characterize the domestic processes well, however, the searches submitted on the website are only partially realized as actual transactions. The information published here reflects the authors’ private opinion and does not constitute real estate market advice.