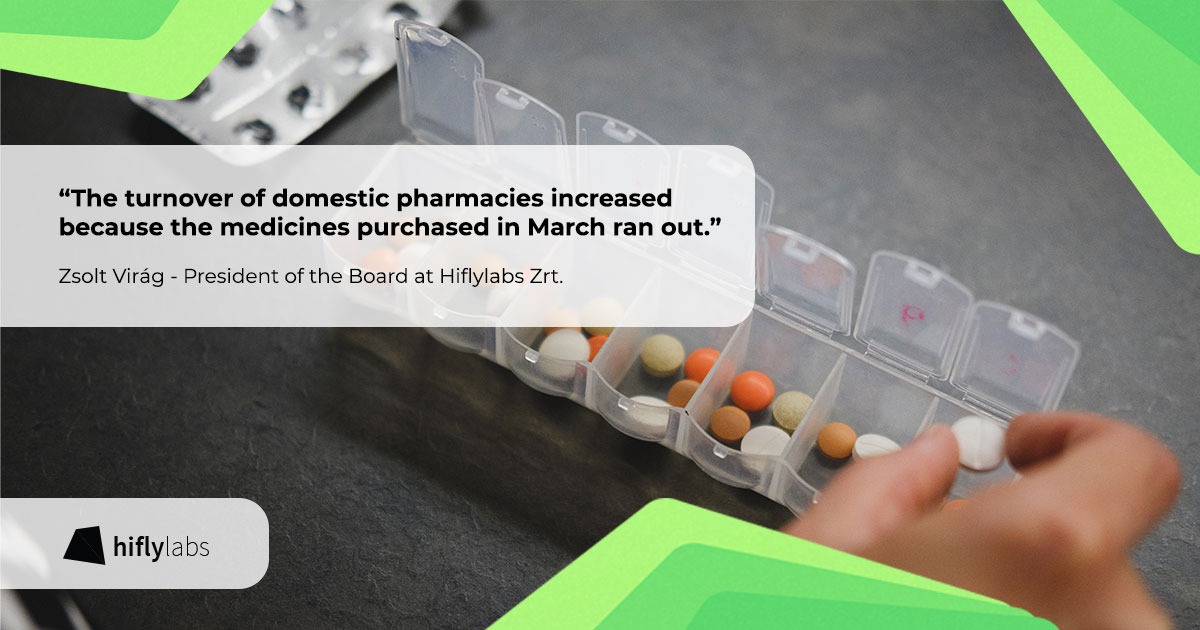 After the decline in April and May, the turnover of domestic pharmacies in Hungary seems to be declining.

In June 2020, the prescription-subsidized pharmaceutical turnover of domestic pharmacies amounted to HUF 44.1 billion, which is HUF 3.5 billion more than in May. Thus, after a two-month decline, pharmaceutical sales returned to grow, as expected. Purchases brought forward in March still largely explain this data. The special volume of drug purchases experienced at the beginning of the spring generated a temporary spike in the home stock of drugs. This effect is reflected in the turnover of recent months.

Enormous March purchases generated by the precaution due to COVID-19 significantly determined drug use for three months, as it is typically possible to obtain a prescription drug three months in advance. However, the home stocks had to be refilled by June. The fact that consumption in June did not jump back to the level of March indicates that purchases in June are no longer characterized by early purchases, but rather a return to normal levels. 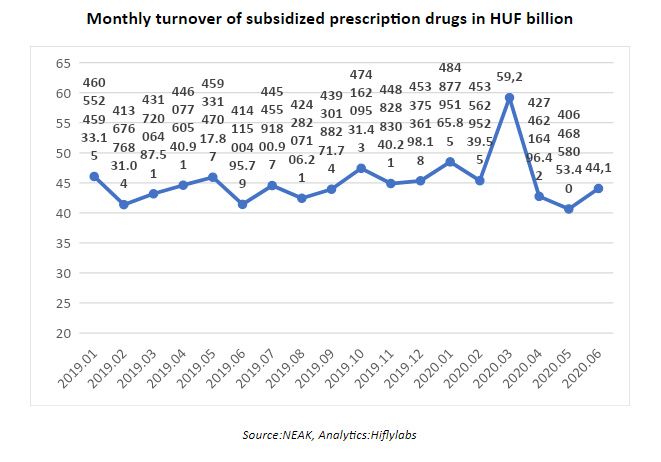 Although the total turnover of the first half of 2020 is 6.8 percent higher than the first six months of 2019, and the monthly turnover in June is 6.4 percent higher year over year, and the fact that the June traffic is virtually the same as the average monthly traffic in 2019 shows that purchases have returned to normal levels.

Examination of the number of products sold also indicates a return to normal levels. In June 2020, 13.9 million boxes of subsidized prescription drugs were sold in pharmacies, that is an increase of 7.4 percent from May and a 4.5 percent increase over the same period last year, but 4.3 percent lower than the overall monthly average in 2019.

Examining the turnover at the regional level, it can be seen that the temporary effect of the coronavirus epidemic is reversed, shown  by the decrease of the agglomeration effect. Over the past three months, the capital’s pharmaceutical turnover has gradually lost its national weight due to its relatively low purchase volume, but has already produced the highest growth in June. In Budapest, 12.1 percent more medicines were consumed in June than in May. Pest county, on the other hand, brought rather low numbers, which suggests that a part of the agglomeration is making its purchases of medicines again in Budapest. Examining the product types, it can be said that rearrangement seems to be common in the market, products considered of a higher weight moved together with the total turnover. Products with higher weight in aggregate sales grew 7-10 percent in June, respectively. Compared to May, sales of insulin products, antacids, anticancer drugs, for example, increased significantly, but sales of antihypertensives and products for the treatment of hematopoietic problems also increased.

However, changes in recent months have left a mark on, for example, the turnover of systemic anti-infectives, which, despite the increase in June, is still more than 15 percent lower than in the same period last year. This is probably due to the fact that due to COVID-19, the general population paid more attention to distance and hygiene, thus reducing the chances of fungal and bacterial infections. However, the result presumably includes the phenomenon that fewer infections were reported to the physician during the epidemic than with minor infections. Author:
Zsolt Virág – President of the Board at Hiflylabs Zrt.