September brought the highest pharmaceutical turnover in the last half year

Similarly to the first wave of the coronavirus, the second wave has also brought a surge in pharmaceutical sales, but the September value is far below the March purchases. In March 2020, the turnover of prescription medicine of domestic pharmacies was more than 59 billion, while in September this value was HUF 47.6 billion.

Compared to the surge in medicine turnover measured in the first wave of COVID19, the analysis of product types also shows a significant difference. While sales of insulin products, antacids, asthma medications, and blood pressure and cholesterol-lowering products, among others, rose sharply in the spring compared to other products, the increase in September was steadier, with similar growth for most product types. The significantly high value in March was largely due to early purchases and sales of products, whose skipping causes immediate complaints or health risks increased the most. In contrast, uncertainty is less prevalent in September, medicine buyers are more cautious. “The Hungarian population reacted completely differently to the second wave of the coronavirus, and this is clearly reflected in the pharmaceutical turnover data,” says Zsolt Virág, Hiflylabs expert, the company that completed the data analysis. 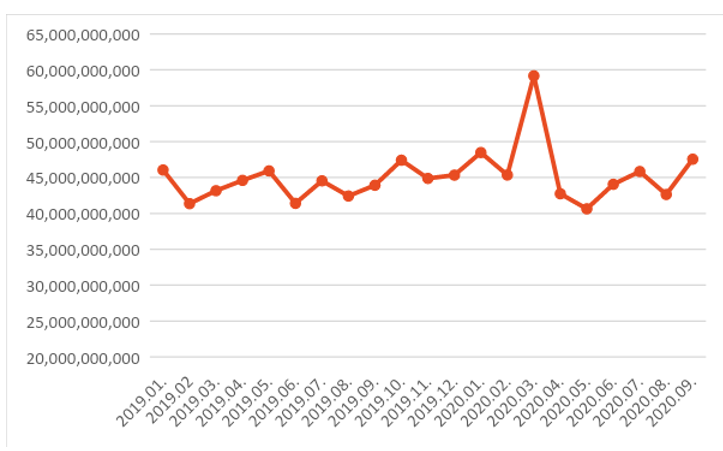 Examining the regional data, it can be said that the end of the summer holidays and the absence from the cities were present in the purchases at the same time. The change in purchases in September was the highest in the capital compared to August, with an increase of almost 17 percent, but compared to the same period of the previous year, Budapest is among the last. Compared to September 2019, the turnover increased in all counties and Budapest as well, but in Budapest by only 4.3 percent, which is only half of the national growth. 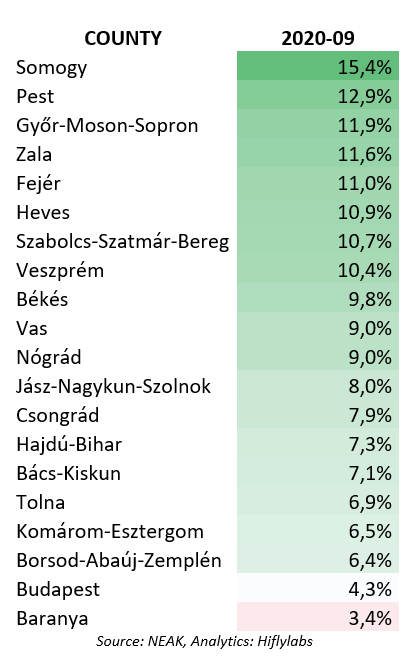 Examining the product groups, it can be said that there is a clear increase in all categories. In September, the largest increase compared to August was produced by systemic anti-infectives, which include among others antibiotics, antivirals and fungicides. The September growth in the category is more than 27 percent compared to August. This was also expected with the arrival of autumn and school seasons, as besides the coronavirus, the seasonal usual upper respiratory diseases have also begun to spread. In addition to anti-infectives, both drug categories with higher weight produced an increase of about 10 percent. Antitumor agents, antihypertensives, heart medications, and insulin preparations also brought steady growth of around 10 percent.

Change in pharmaceutical turnover by product type (compared to August 2020) 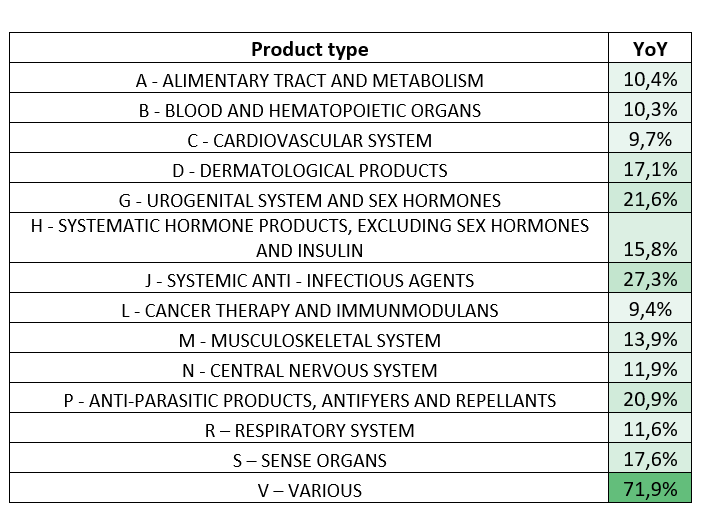 Despite the increase in September, domestic drug consumption is far from significant in Europe. According to OECD data, adjusted for purchasing power, per capita drug consumption in Hungary is 13% lower than the OECD average, making it in the bottom third of the consumption list. Medicine buying patterns vary significantly from country to country, but drug use is not steady even across regions. Domestic pharmaceutical sales, for example, lag far behind neighboring Slovakia or the Czech Republic but exceed per capita medicine consumption of Luxembourg or the Netherlands.