Towards the end of the year, in November, medicine sales in Hungarian pharmacies increased to nearly HUF 48 billion.

According to the latest data, in November 2020, domestic pharmacies sold prescription subsidized medicines worth HUF 47.7 billion. Turnover in November increased by a further 1.7 percent compared to October and by 6.3 percent compared to the same period of the previous year. This month’s performance is the third largest sales number in the last 2 years. The strong November turnover was exceeded only by the HUF 48.5 billion sales in January 2020 and the HUF 59.2 billion sales in March 2020, respectively. Due to the start of the year, sales were typically higher in January, while record sales in March were due to a „pharmacy rush” caused by the coronavirus. In this context, the November data is particularly significant. The introduced curfew may also have contributed to the November expansion. According to the new sales data, a part of the population could, as a precaution, bring forward the purchase of medicines due in December. 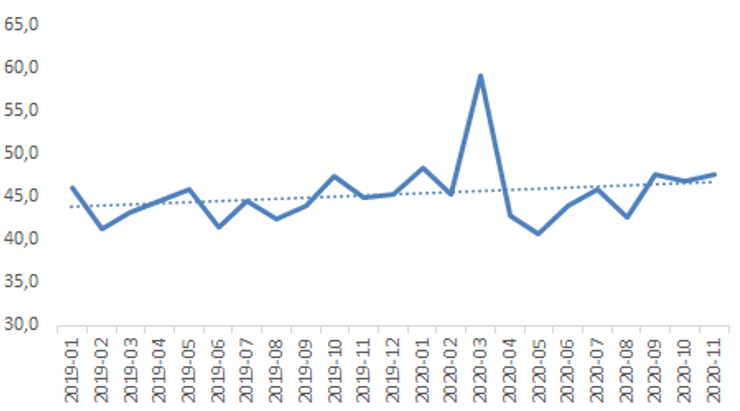 “The cyclical behavior of medicine sales has virtually disappeared by November, contributed significantly by the uncertainty caused by the second wave of the coronavirus in recent months. Examining the data of the last 3 months, the monthly turnover fluctuations have been reduced to a minimum, the sales of medicines have grown steadily,” says Zsolt Virág, President of the Board of Hiflylabs Zrt, the company that completed the data analysis. In light of the trends of recent months, growth is expected to be around 5 percent for the year 2020 as a whole.

Regarding the increase in turnover in November, it is important to point out that the number of boxes of products sold is less large. The number of subsidized prescription drugs increased by only 3.2 percent compared to both October and November 2019 sales. The rise in prices also played a role in the increase in the value of pharmaceutical sales in November. According to CSO measurements, overall pharmaceutical prices rose by 2.4 percent on average in November compared to the same period of the previous year.

The profitability of sales of prescription medicine

The second wave of the coronavirus epidemic brought steady growth in medicine sales towards the end of 2020, however, the indirect effects are worth examining through the sales performance of drug categories. Of the larger medicine groups, gastrointestinal metabolism and blood and hematopoietic drugs increased the most compared to the same period last year. The category of blood and hematopoietic drugs includes, for example, antithrombotic agents, anti-anemic agents, or blood substitutes. Protection against coronavirus has had a significant effect on both gastrointestinal metabolism and hematopoietic drugs. Vitamin D was consumed in large volumes in the former group, while in the latter group, agents that reduced the development of thrombosis contributed significantly to the growth.

In November, prescription vitamin D was sold for HUF 557 million, which accounted for 1.2 percent of the total pharmaceutical turnover. It is important to note that vitamin D is also available without a prescription at pharmacies, making the value of sales even higher in November. The turnover of the immune-boosting vitamins, also recommended by medical officers, increased by 135.3 percent compared to the value in November of the previous year. Looking ahead, large volume growth in sales of immune-boosting agents is still projected in the coming months.

Protection is important, but even more important is saving patients who are already infected with the virus. The European Council granted access to the active substance remdesivir, while the National Institute of Pharmacy and Food Health approved the domestic use of the active substance favipiravir. The two active ingredients can be classified as systemic anti-infectives, and the sales of this category rose by 10.5 percent compared to October. According to experts, the active substance remdesivir inhibits the growth of the virus in severe patients, while favipiravir inhibits the growth of the virus in the early stages of the disease. In November, the active ingredients were only given for hospital use and could not be included in private purchases.

Among the medicine groups, however, sales of musculoskeletal drugs declined significantly. The medicine group, which includes bone disease drugs or anti-gout drugs, saw an 8.2 percent year-over-year decline. The reduction may have been due to both the closure of institutions due to the coronavirus and the patients’ mobility difficulties.

Examining the regional processes, there was an annual increase in all counties. Compared to October, pharmaceutical sales fell in three Transdanubian counties, Somogy, Tolna and Vas counties. The decrease was mainly due to a decline in sales of anticancer drugs and hematopoietic agents. These two categories account for nearly 30 percent of the total prescription drug sales in the counties, so a weaker monthly performance can easily move turnover change into the negative range. 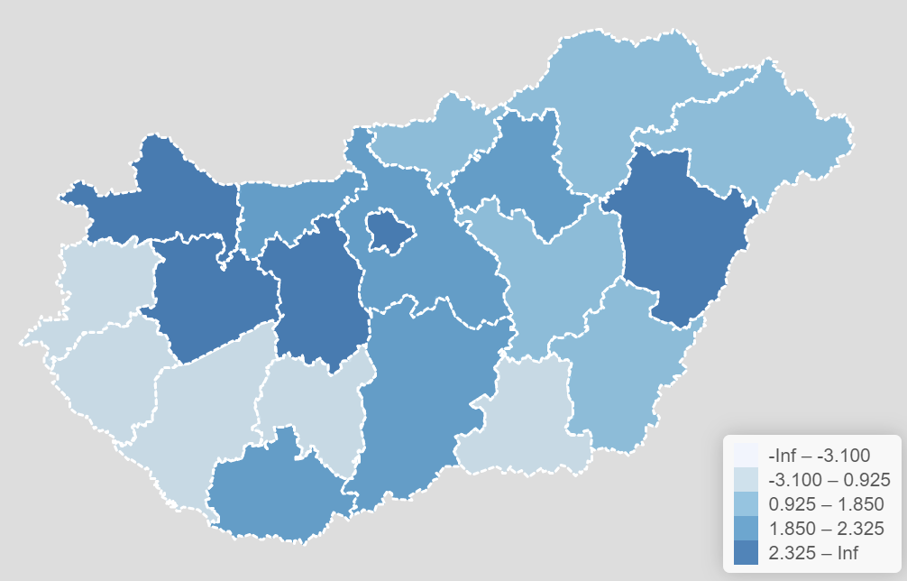 Change in pharmaceutical sales regionally (compared to the previous month)

The autumn wave of the coronavirus has again exacerbated the gap between the capital and the agglomeration in the pharmaceutical trade. Thanks to the return of home office, the masses living near the capital but working in Budapest were able to buy their medicines in a pharmacy close to where they lived. And the pharmacies in the capital were likely to face significant turnover losses during the month. As a result, in November, pharmaceutical sales increased the most in Pest County, by 11.7 percent compared to the previous year. And the capital had the smallest growth, pharmacies sold only 2.4 percent more medicine purchases increased only by 2.4 percent compared to November 2019. The impact of the catchment area can also be mentioned in the case of Heves county, which is in easy reach on the highway. In Heves County, pharmaceutical sales increased by 8.7 percent on an annual basis. 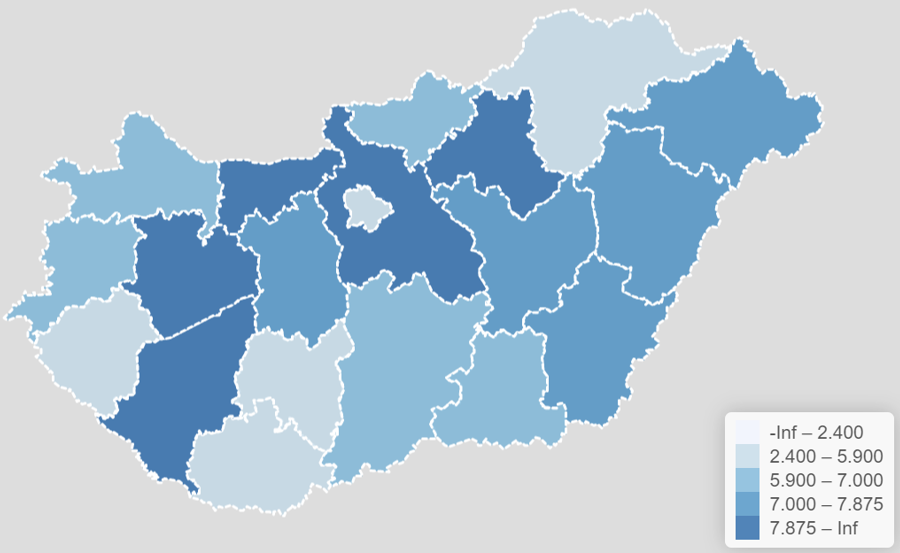 Changes in pharmaceutical sales regionally (compared to the previous year) 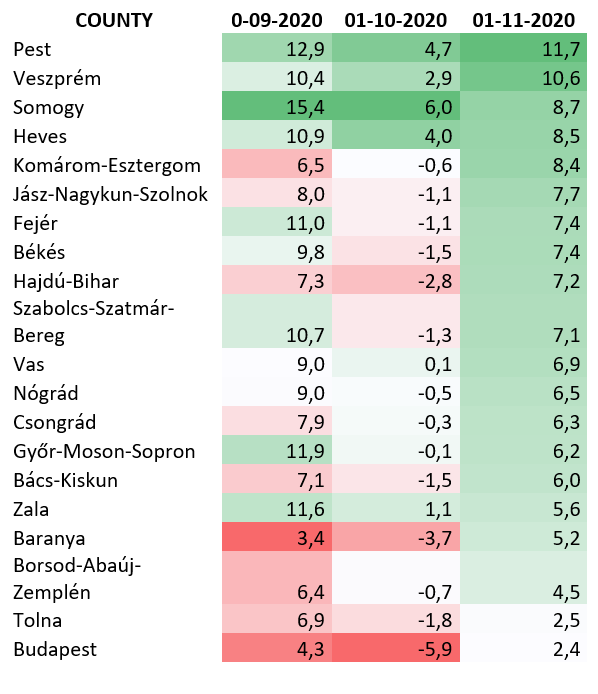